Social distancing got you bored?  Ready to escape your four walls for a little while, even if it’s just to stare out the car window for a little bit?  Us, too!  That’s why we called on our associate and Davie County Tour Guide extraordinaire, Kim Strohacker, to help us learn a little more about this place so many of us call home.  Best of all?  We can see most things from the comfort and safety of our own four wheels!

A Brief History of Davie County

There’s a whole lot of history in Davie County!  Once a part of Rowan County, Davie County was formed in 1836.  The area was known as being within “the Forks of the Yadkin” due to borders of the South Yadkin and Yadkin rivers.  Early settlers encountered abundant wildlife and fertile farming land. Five main roads evolved and linked the many villages and community centers.  “Townships” were established throughout the rural areas of the county and flourished as settlers continued to move to the west.

The Cooleemee area was known as “the Shoals” in early days, and was prosperous due to an iron foundry and grist mill located on the South Yadkin River.  Years later, the Hairston family purchased these businesses and established cotton mills and labor housing for the area. Two popular sites there are River Park (more affectionately known by the locals as The Bullhole) which is a park that evolved from a large dam on the South Yadkin used to generate power, and the Zachary House Textile Heritage Museum.   Further to the east is the historic Cooleemee Plantation where the Hairston family lived. The plantation has private owners who are currently working to open the site back to visitors.

A Scenic Drive Through Davie

Moving up the Yadkin River side of the county on Highway 801, you will find the historic Fulton Methodist Church, established in 1889, as well as the communities of Jerusalem, Fulton, Fork-Bixby, Advance and Hillsdale.  Further north were the communities of Smith Grove and Redland, as well as the historic Farmington area which was a major trading center serving the Pino farming areas. Several historic buildings and homes still exist including Wesley Chapel Methodist Church in Pino.

Further west are the Cana community and Clarksville township (also known as Chinquapin) which gained a reputation as a “distilling” center.  You may drive by the Cana Store, located on the aptly-named Cana Road, which still stands today. Also to the west are the County Line, Davie Academy, Center, Jericho-Hardison and Calahaln townships.  Calahan Mountain is visible today and was mined for gold in the mid 1800’s. You may also note the historical marker for Colonel Thomas Ferebee who was reported to be the “trigger man” when the atomic bomb was dropped on Hiroshima.

The best way to envision this history and the great beauty of our county by getting in your car and driving to explore the many roads and historical areas and sites.  There are several locations on county roads that will give you a majestic view of Pilot Mountain in Surry county, if you know where to look!  Traveling up Highway 158 from Mocksville to Advance, it can be viewed just past Farmington Road.  You can also get great views from areas of Cana Road, and many others throughout Davie.  Tell us where you got the best view!

An Area Rich With History

As you can see, there is lots of history that can be learned about Davie County and its past.  As soon as you’re able, a great resource for research is the Davie County Collection housed in the Martin-Wall History Room at the Davie County Public Library.  Until then, enjoy a Sunday drive (or any other day!) through our beautiful county! 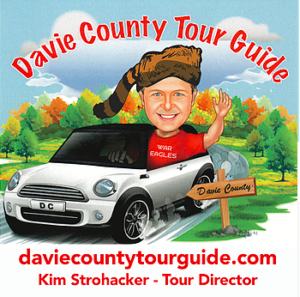